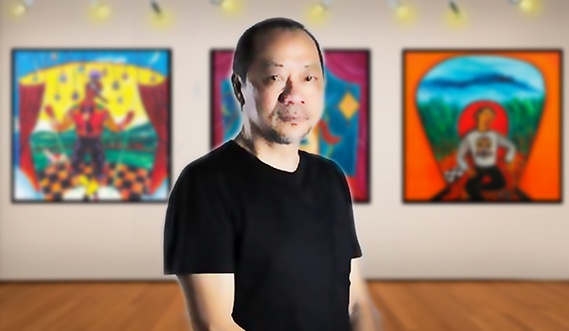 Reposted from Going Beyond Gold, a publication in commemoration of the Golden Jubilee of St. Jon’s Institute in 2009.

When CHARLIE CO (Class 1979) was in grade school, he joined an art competition and lost. The following year, his classmates again voted him as their representative to another school art contest. His teacher dissuaded him, he recalls, “because she said I was going to lose anyway as I failed to win the previous year.” Believing that failure must inspire, not deter, people, Charlie Co pursued his interest in visual arts by enrolling in the Fine Arts program of La Consolacion College. Today, Charlie ranks among the well-respected names in the Philippine visual arts scene, having earned numerous awards and participated in international gatherings, including the Asia-Pacific Triennial in Brisbane, Australia, the Sao Paolo Biennial in Brazil, and a modern-art conference sponsored by the Japan Foundation ASEAN Cultural Center in Tokyo.

In addition, he has participated in art exhibitions in Taegu, Korea, in Gifu and Naguri Lake in Japan and in Singapore, as well as in the Osage Gallery in Beijing, China and the University of Newcastle in Central Coast, Australia; he was artist in residence in Beijing and the Central Coast and was a grand prize recipient.

Charlie was named one of the Thirteen Artists of the Cultural Center of the Philippines in 1990, the country’s representative in the 23rd Sao Paolo Biennial in Brazil and the 2nd Asia Pacific Contemporary Art Triennial in Australia, both in 1996. He won in the biggest art competition in the country, the Philip Morris ASEAN Art Award in 1998, and was awarded the Bro. Alexis Award from the University of St. La Salle.

The multi-awarded artist has been helping other artists in the flowering and fruition of their craft. He co-founded the Visayan Visual Arts Exhibition and Conference, a biennial gathering of visual artists in central Philippines. He continues to open the doors for young artists by giving them space to showcase their works at the Gallery Orange, which he owns. He hopes that the gallery will “help keep the art community alive. It’s an ongoing process.”